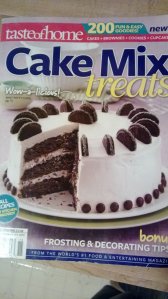 Two years ago my step-mom got me a cooking magazine for Christmas. Now, it wasn’t the only thing she got me and since we had to haul all the presents nearly three hours back to our house (to be fair, most of the presents were for the kids), somehow it got misplaced. I honestly didn’t even really think  about it. Not because I’m an ungrateful brat (at least not anymore), but because I remembered it as just a magazine and my step-mom was famous for buying those flimsy cooking magazines at the register which promised 50 new ways to use Bisquick or 25 lite menus using Crisco.

Over the years, I have looked through hundreds of these magazines. Most of them were about the size of a 5X7 photo with lots of glossy pictures of fancy decorated cupcakes or cookies. I’d get excited about recipes I might want to make, but I’d forget to copy down the recipes and by the time I thought about making the treat, she’d thrown away that particular batch of checkout delights and gotten a whole new batch.

However, about a year ago, while I was finally getting the rest of the kid’s Christmas goodies out (we like to bring out a new toy every month or two, so they get excited about them again and we can secretly get rid of older toys without them caring as much), I discovered it again. It was not one of the flimsy books that used to decorate her kitchen cabinets, but rather a much heartier collection of desserts which all boasted starting with a boxed cake or brownie mix.

I figured what the heck and flipped through it. What I found tickled me! Tons of recipes that looked fairly simple and super tasty. The first one I tried was actually for my son’s kindergarten pitch-in. His school mascot is an owl and there were adorable little owl cupcakes that used Nutter Butter cookies. I was so excited about the amazing cuteness of my owls that I totally spaced the school’s peanut butter ban. Luckily it was held at a parent house rather than the school and there were no kids with peanut

allergies in his class (I actually knew this second fact, but peanuts are still banned at his school).

The oohs and ahhs I got over the cupcakes sent me on a bit of a baking spree. So far I’ve made over a dozen of the incredible edibles, ranging from whoopee pies to gooey pumpkin bars to German chocolate bars to what is basically a grown-up version of a Hostess cupcake. All have been phenomenal.

One of the greatest parts of this book is the Bundt cake section. Years ago my MIL bought me a Bundt pan. I’d never made a Bundt cake before, but since I had all these recipes claiming to be amazingly simply, I threw caution to the wind and ventured into new territory. Oh my am I glad I did. Although I have made about half a dozen of the Bundt cakes so far, my most recent test was the triple chocolate Bundt cake.

This baby is fantastic! It is moist. It is chocolatey. It has just a slightly hardened edge that gives it an amazing texture. Despite using a white cake mix as a base, every bite of this cake is pure chocolate. There are mini chocolate chips in half of the white cake mix, Penzy’s Dutch process cocoa powder in the other half and a frosting that is basically just bit of canned chocolate frosting and milk. The batter is put into the pan in layers so it gets all swirled together just like the best marble cakes.

The only downside to this cake is that the frosting is a bit runny, even when spread on a very cooled cake, so it does tend to pool in the middle and around the edges. Granted, that means more frosting to scoop up with every slice, but it also means a bit of a mess that doesn’t always look pretty when serving.

Still, this recipe is so good when I brought it to a party one friend had three pieces and the others all raved about it all night.

If you can find a copy of this cookbook, get it. You will thank me. I know, it may seem like cheating to use a boxed cake mix, but really, who has time to make everything from scratch? Certainly not this full time teacher and mother of two. The cakes, cookies and bars don’t taste boxed and you will amaze your friends and family with these tasty treats.

Appearance: 7/10 (that runny frosting does it in a bit)