A few weekends ago I attended Fandom Fest in Louisville, KY. While I’d been to several comicy type conventions before, this was my first trip to Fandom/Fright Fest. I was actually scheduled to go to Wizard’s World Comic Con in Chicago, but my darling BFF had to go and move halfway across the country and wouldn’t be able to go to Chicago with me because she’d be starting her new job. Since the con is always our big girls’ weekend, we opted for Fandom/Fright fest since it was within a day’s drive, was held two weeks sooner and had the added bonus of being the hometown of a friend of ours.

While there were quite a few things about Fandom/Fright Fest which disappointed me (I’ll have another blog about that on Wed dear readers), I was super excited to find a little chocolate booth set up in the vendor’s hall. In all the years I’ve been going to Wizard’s World, there has never been any sort of edible treat to purchase (aside from some damn tasty twisty cones at the snack stand). I’ve always reserved my chocolate buying for Ethel M’s (before they abandoned me) and Vosges on Armitage Street.

Fandom/Fright Fest not only boasted John Barrowman (of Torchwood and Dr. Who fame) and three cast members from Firefly (Wash, Jayne and Kaylee), but also Chocolate F/X. This seemed inspired to me. My friends grabbed a package of the toffee to split, but being the sucker for truffles that I am, I had to go with the fancy decorated chocolates. I mean, I love toffee and all, but who can argue with chocolate that has Dracula, Godzilla, Frankenstein and other horror classics on it? Not this girl. Turns out that despite the fact that one type of toffee was clearly labeled as bacon toffee and the other wasn’t, my poor BFF, who has been a vegetarian for like 12 years now, accidently bought toffee that also had bacon in it. Our other friend lucked out as she loves bacon, so she got all of the toffee. Bad marketing. 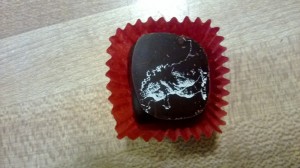 The first one I tried was the dark chocolate Godzilla. I was not at all impressed. The filling was a caramel of sorts, but it was overly sweet in a really artificial way. Now, I know I’m not a huge fan of dark chocolate, but that is usually because I don’t like the bitter taste (and after taste). This one was not at all bitter. In fact, it was sort of cloyingly sweet. The caramel was super chewy and had a vaguely liquorish taste. I don’t mean licorice like the candy, I mean liquor as in alcohol. The only problem was that I couldn’t place the specific spirit it seemed to be trying to replicate. All I know was that I did not like it. No sir, not one bit.

The other dark chocolate offering, which looked a bit like Dracula’s dune buggy was a bit better. It was still sweet and not bitter, but it wasn’t as sweet. It had a rather non-descript chocolate filling. It was a bit like a brownie, both in texture and in taste. It was a bit chewy, but overall, not too bad. Nothing to write home about, but also nothing like that caramel I didn’t like.

Since I’m a save the best for last kinda girl, after I got rid of the dark chocolate, I moved on to the milk, hoping that the overly sweetness of the candy had 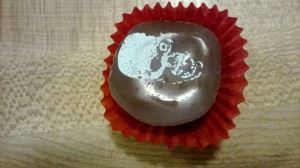 something to do with the darkness of the chocolate. My hopes were quickly dashed. The first milk piece, which had the sort of zombie skull on it also had a chocolate fudge-like filling. It was also better than the caramel, but still too sweet for even my sweet tooth. The second milk piece nearly killed me. When I turned it over, I noticed the salt on top of it and figured it was a sea salt caramel. Well, it was a salted caramel all right…a spicy salt and a pepper caramel. And not the harmless black pepper kind either. One bite set my mouth on fire. I like the combo of sweet and hot, but when my lips are tingling after 8 ounces of water, I like it much, much less. I think the caramel itself would have had a better flavor than it’s dark companion, but it was too hot for me to really figure out.

The final piece was the white chocolate piece. It was my favorite, but the flavor was a bit indistinct. There were definitely some sort of coffee hints, which really shocked me as I don’t like coffee one bit. Coffee pieces are usually my least favorite, but this one was a bit more chocolate mocha than straight coffee, which made it better. Not great, but better.