A new view of a familiar place 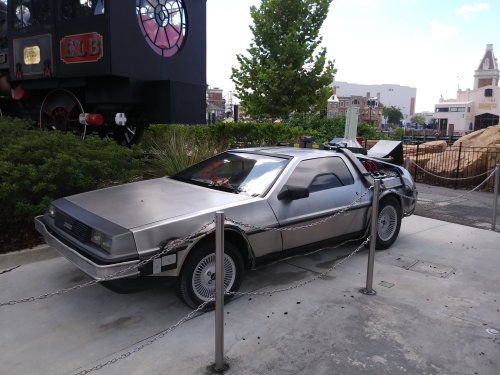 I can’t remember exactly how old I was the first time I went to Universal Studios Orlando. I know it was before Islands of Adventure existed, but not when it first opened. I’m thinking mid to late 90’s.

I was so excited to go since I’d grown up near the original Universal Studios in Hollywood and spent so many hours of my youth completely in awe of actually being in the town square where Back to the Future was filmed, talk to K.I.T.T from my favorite show Knight Rider, and desperately try to get picked to be one of the volunteers to ride the bicycle and fly with E.T. While I never got to soar against that green screen, I did love the backlot tour in Hollywood, so I figured Universal Studios Orlando would be amazing too.

And it was. I loved all of it. My favorite part was definitely the backlot tour, even if there wasn’t that much actual filming going on. It was a bit odd to me that Earthquake, King Kong and Jaws were their own stand alone rides, since they are integrated into the actual backlot tour in Hollywood, but I still got a kick out of them. I also really loved the Back to the Future ride. It was the first time I’d been on a motion ride like that.

Fast forward a few years to 2004, my husband and I moved to St. Augustine, Florida. Disney annual passes were a bit out of our price range, but Islands of Adventures had opened at Universal Studios Orlando, and we decided passes were a must. In the 8 years or so that had passed since my last visit, not that much had changed. In fact, the only new edition I remembered was Men in Black, and it was fantastically fun.* We loved our annual passes. Often we’d go for just a couple of rides and then we’d catch a movie and get some food. It was a great way to unwind after work or spend a lazy Sunday afternoon. Sure, I already knew all the secrets of Twister Ride it Out, but I still went to see it because it was fun. And no, the “shark attack” in Jaws no longer even slightly started me, but who cares? It was fun. And don’t even get me starting on Dueling Dragons. I LOVED that ride.

It’s been about 15 years since I’ve visited Universal Studios Orlando resort, but this past week, I got to go as part of trip to help me learn more about the resort so I could help clients make their vacation plans. This was really exciting for me for two reasons: 1) I love helping people plan trips and I want to be able to give them the most accurate information and the best advice I can.

But that’s for another post. This post is about what I didn’t realize in my excitement: in order to make way for my beloved Harry Potter and all his magical experiences, the powers that be had to get rid of almost every single ride I’d known in the studio side of things. Ok, true, it wasn’t just the wonderful world of Hogwarts and Diagon Alley that pushed out my old favorites like Back to the Future and Twister. The park underwent a HUGE facelift that left it, well, like a lot of plastic surgery patients, almost unrecognizable to me.

As I strolled through the park, only one ride remained from my first trip there over 20 years ago: E.T. Adventure. The ride is absolutely unchanged from the first time I rode it all those years ago. It’s still a simple dark ride that reminds me a bit of Peter Pan’s Flight, only this trip is on a fake bicycle with a mission to help E.T. save his dying planet. At the end of the ride, E.T. still calls out the names of each rider on the bike. Well, in theory he does. Somehow there was a snafu when we went through and we got called the names of the people who’d been just ahead of us in line. Still, it was cute and brought a bit of nostalgia to me.

One of my fellow vacation planners told me that the only reason the E.T. Adventure hasn’t been sacrificed to progress is because Steven Spielberg himself adores the ride and had such a hand it in. He basically demanded that it stay in the park and at this point if Spielberg wants it, he pretty much gets it. Not that I mind. I liked seeing at least one part of the original park still standing.

Ok, that’s not entirely fair. There are some homages to the parks origins scattered throughout. The Mummy ride features a golden statue of Kong in the treasure room (since the Mummy ride is housed in the old Kongfrontation building). There are also some hidden Easter Eggs from Jaws in Diagon Alley, which occupies part of the space that Jaws used to. And there is still a chance to get a photo op with the shark that used to guard the entrance to the ride, but it’s been moved to the San Francisco Wharf area. 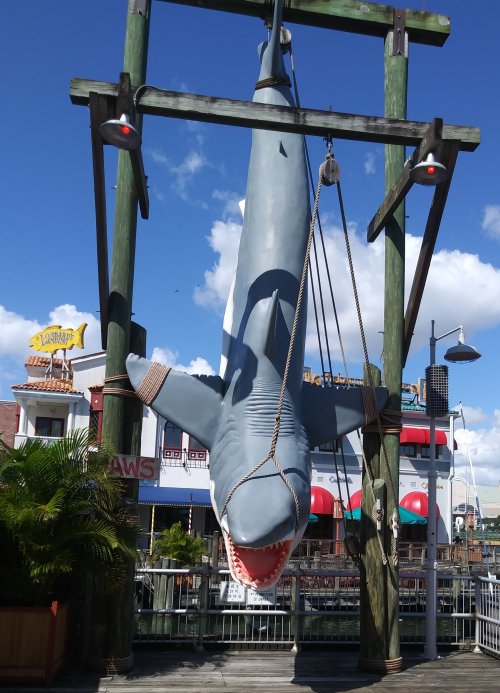 As much as I love all the new attractions and updates, I can’t help but be a little taken aback that so little remains of the original park. It’s not that I expect time to stand still in the parks. I understand the entertainment industry is constantly changing and if they want to appeal to their audience, which is also growing and changing, they need to make sure they are giving everyone a good bang for their buck. But classic movies are classics for a reason: they withstand the test of time. It’s a shame the same is not always true about classic rides.

At school we are having a Christmas tree decorating contest. Well, sort of. One of the clubs is sponsoring a contest where teachers deck out paper trees, and by default at least a portion of our hallways. This year each department got to pick a holiday movie as the theme to base our decorations around. I’m not sure if we actually win anything for really decking the halls, but this year my department has gotten into it.

Not that I think we’ll win. While we may be one of the bigger departments in the school, we are all bogged down in research papers and somehow it seems there’s always another department who recruits students to help them really go all out. As much as I’d love to do that, we have too many standardized tests going on and too much prep to do before finals, so instead of sacrificing class time, we are sacrificing our own time.

Although we’ve done this contest for several years now, I’ll admit my department has never really gotten into the spirit of it. The first year I was the only one who really did anything for our fake tree and all I did was create ornaments for it. Now, the ornaments were pretty fantastic: they had the body of Frosty with the head of our principal. Thankfully I knew he’d enjoy it. The ornaments were cute, but nothing compared to the display the art department put on, complete with not only the most elaborate paper snowflakes I’d ever seen, but also snowflakes digitally projected all over the hallway.

This year, seconds after the email announcing the contest came out, my newest colleague ran across the hallway to confer with me about our theme. She wanted to make sure we got first dibs on our movie: Home Alone.

I handed the paper tree to her and told her to go nuts. And she did! She decked that tree in garland and wrote “Merry Christmas ya filthy animals!” She draw an amazingly accurate picture of Macaulay Culkin, complete with hands on face in mid-scream. She also added a great drawing of an iron to the top of the tree. She then created a window and looking at the tree from outside are the two male members of our department dressed up like the bandits–one even has a iron mark on his face.

Seeing what she created kicked a few more people, including myself into gear. I made paint cans which we tied to strings and hung from the ceiling in front of the fake window. Another of my coworkers created Kevin’s battle plan for dealing with the bandits.

Looking at it, it reminded me of my first experience with Home Alone, when I worked at the movie theater…during the sequel’s original theatrical debut. It opened on Thanksgiving day and it was a crazy day. Every employee had a Home Alone 2 button attached to our oh so stylish red polyester vests. There was a giant Home Alone 2 display stand, complete with a NYC skyline in the background. I remember several of my coworkers wanted that display and our manager had to raffle it off. He also had to raffle the posters off.

What I remember most about that premiere is having to do so much cleaning at the end of the night because we were so busy the place was trashed. Even behind the concession stand there was popcorn, butter and soda everywhere. Still, I loved that job and there are definitely days where I might not miss the pay, but miss the fun and simplicity of the job. I also greatly miss the camaraderie we shared. We were high school and college kids. For most of us, it was our first job. We got to watch free movies and eat popcorn. It was a blast!

While my current job may be more fulfilling and I may love it, a piece of my heart will always belong to General Cinema.

I’m not sure when the trees we’ve decorated will actually be judged, but I hope we at least get an honorable mention for our creativity and dedication.

Filed under education, entertainment, good days, life as a teacher, movie references, my childhood, nostalgia, ramblings, teaching, the arts, what makes me me